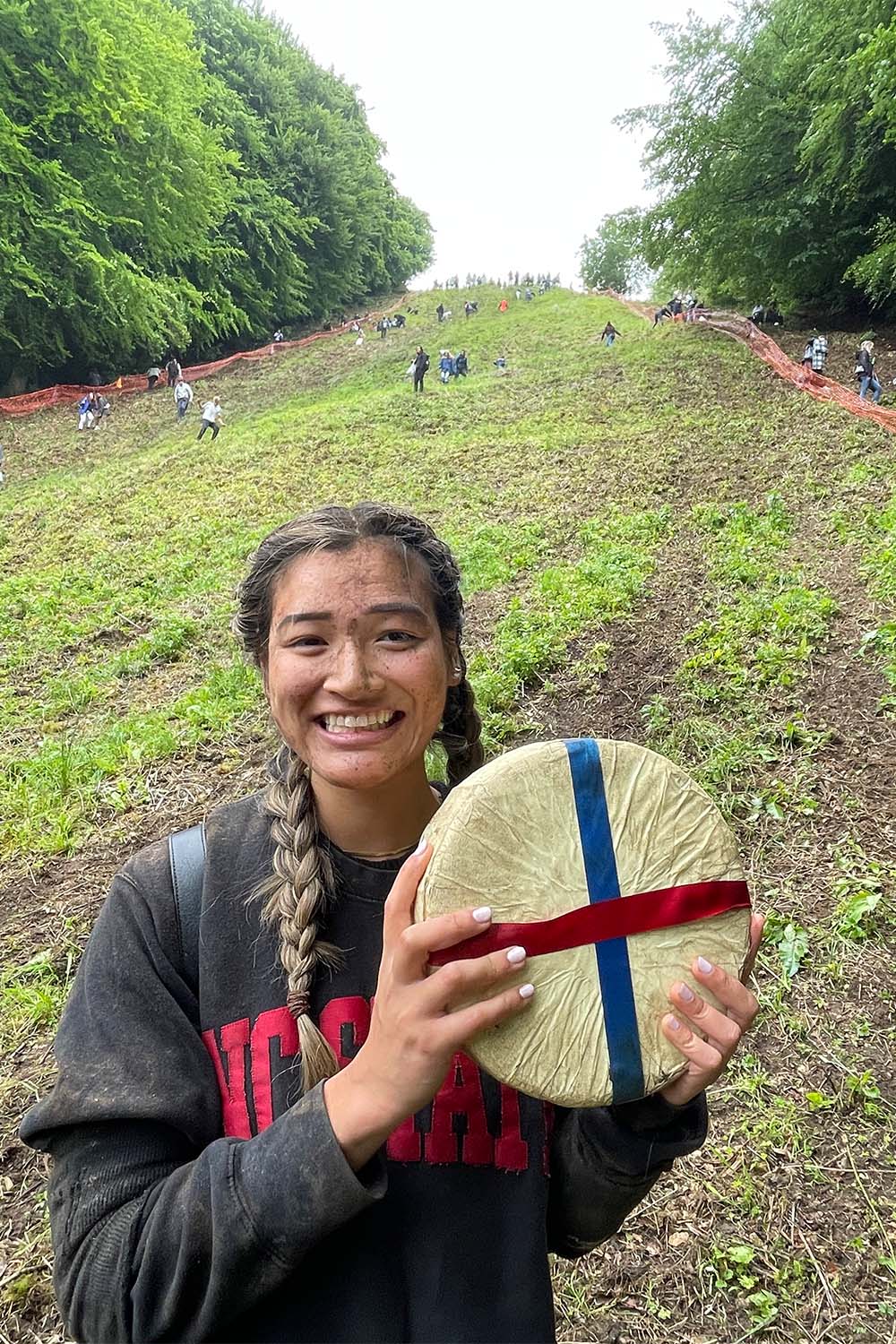 There are few sporting contests around the world that can match the oddity and utter brutality of the Cooper’s Hill Cheese Rolling, an annual event near the English town of Gloucester. Contestants are warned that they enter at their own risk, and broken bones are a common occurrence.

Yet every year for generations, dozens of people have shown up for the chance to chase a disk of Double Gloucester cheese down a 200-yard hill that is so steep contestants inevitably end up rolling and bouncing most of the way down. In recent years, the event has become a cult favorite on YouTube and was featured in a 2020 Netflix documentary series on extreme and quirky competitions.

One of its most ardent fans is Abby Lampe ’22, who graduated from NC State in May with a degree in industrial systems engineering. She has seen the Netflix series and watched countless hours of videos of the race, all with the dream of one day entering it herself.

On Sunday, Lampe’s dream was fulfilled. Not only did she compete, Lampe won the women’s event. And she did so without suffering any major injuries.

“I have a few bruises on my left leg and some scratches, and possibly some burst blood vessels on my hand,” Lampe, 21, said in an interview from Gloucester just hours after her win, believed to be the first by an American female. “They’re very minor injuries, so I can still walk and talk. It was very muddy, so I had mud in my teeth, actually. I also think I chipped a little bit of a tooth.”

And what did Lampe win for her efforts? “I won the cheese,” she says. “No money. Just bragging rights and an 8-pound block of Double Gloucester cheese.”

Lampe is spending the summer in Europe before she starts work in October as a technology consultant with PricewaterhouseCoopers in Charlotte, N.C. She’s spending much of her time in Spain, but she came prepared for the cheese rolling. While packing for the trip, she included knee pads from her days playing basketball and volleyball as a kid to wear as protective gear during the race.

Growing up in Smithfield, N.C., Lampe also played soccer and did gymnastics as a kid, and she was a regular participant in intramural sports at NC State. “That’s what made me so agile and flexible, honestly,” Lampe says. “I’m pretty bendy.”

In addition to studying videos on YouTube to see how contestants attacked the hill, Lampe visited Dorothea Dix Park near campus in the weeks leading up to her trip to practice rolling down its hills. It turned out that they weren’t nearly steep enough to replicate the experience on Cooper’s Hill. It was so steep, she says, that she had to hold on to the ground to keep from accidentally rolling down in the moments before the race began.

“Videos and photos do not do it any justice,” she says. “It’s a very steep hill. There’s a very large initial drop and then it’s very bumpy with a lot of uneven surfaces.”

Lampe’s preparation included visiting the site two days before the race so she could take a practice run, a move that convinced her to buy gloves to protect her hands. And on race day, she studied a couple of men’s races before her event. She noticed that both winners began from the left side, as you look down the hill, so she made sure to secure the outside spot on the left when it was her time to line up for the race.

“As an engineer, one of my core values is to be prepared and understand what I’m getting myself into,” she says. “Maybe this was not the smartest idea, but I wanted to be prepared.”

Even so, Lampe couldn’t control everything about the race. “I knew I was going to fall down at some point, but I didn’t expect to fall down so early and just keep rolling,” she says. “I could feel my face getting smushed in by the hill. I just wanted to get to the bottom of the hill.”

And so she did, ahead of all the other competitors. In videos from the event, Lampe is beaming as she holds up her winning cheese. Her face and clothes, including a black NC State sweatshirt, are splattered with mud. “I really wanted to represent NC State,” she says.

Lampe plans to ship the cheese home to her parents, who now live in Clayton, N.C., and enjoy it with family and friends when her trip to Europe ends later this summer. She says the race exceeded her expectations, and she hasn’t ruled out defending her title next year.

“It’s so surreal,” she says. “I went out to the pubs in Gloucester last night, and everyone bought me drinks. Ladies wanted to take pictures with me and the cheese, which I brought with me. I’m still on cloud nine.” 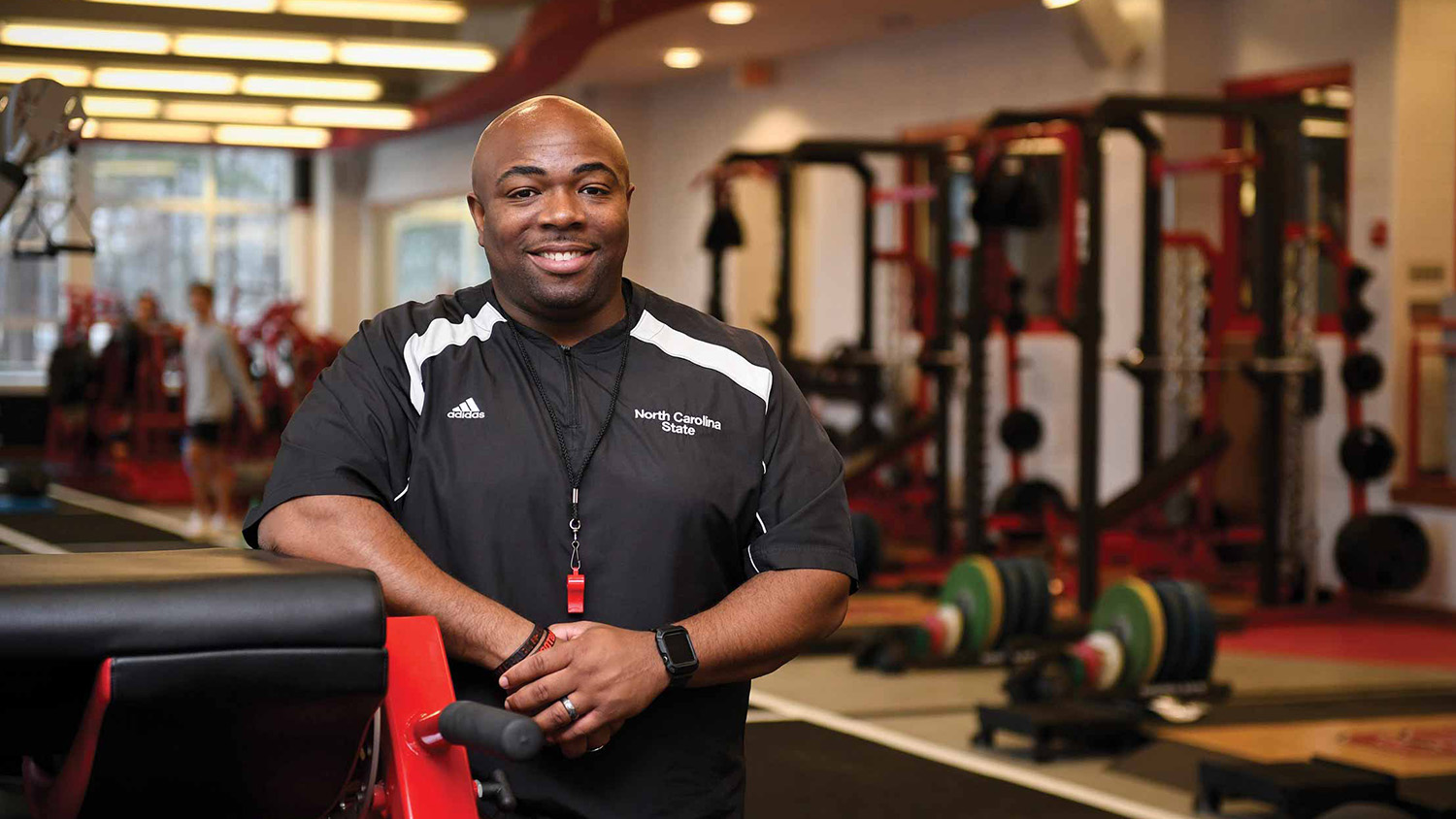 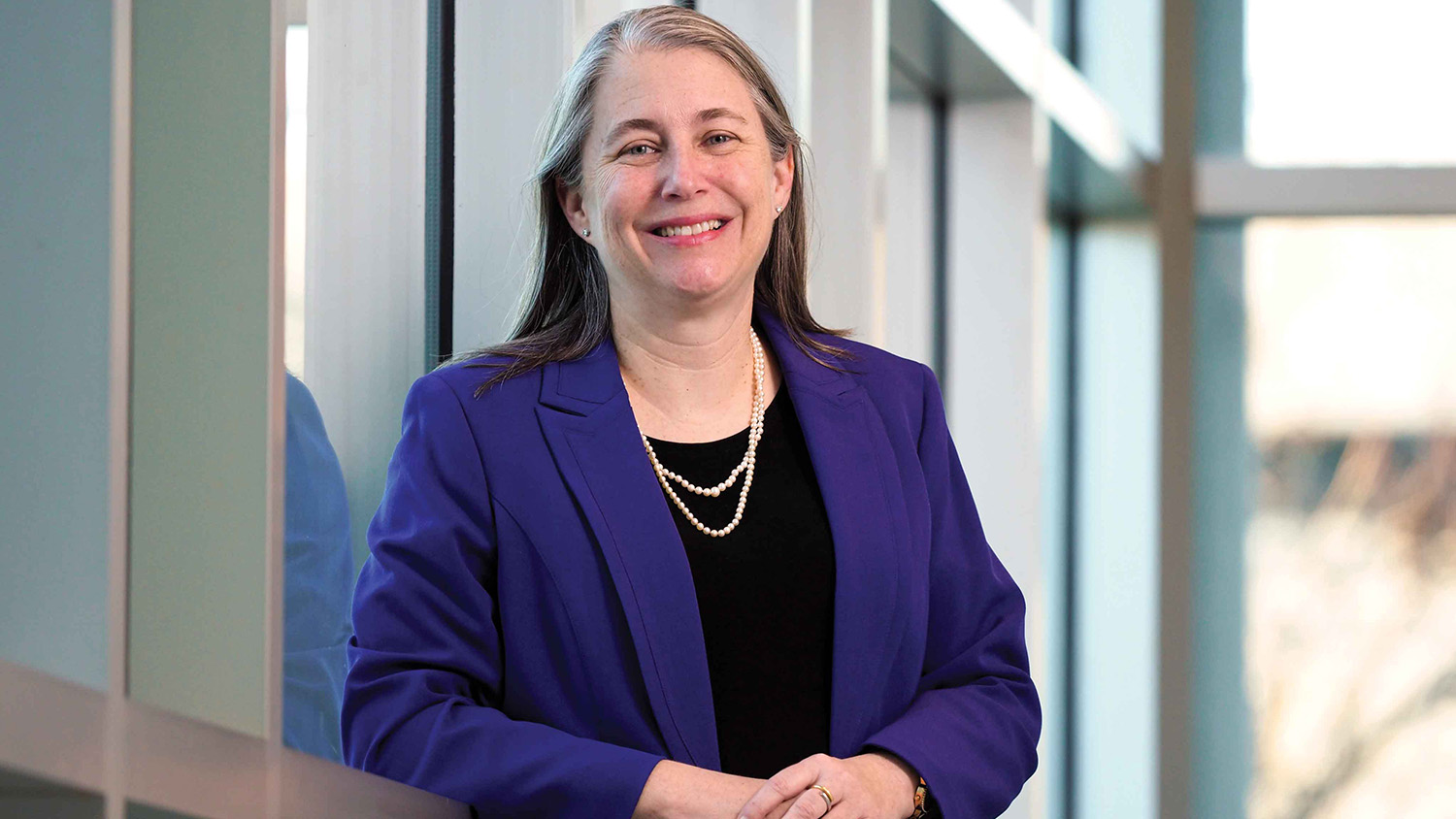